Inspiration during the Fourth of July

Inspiration can arrive from the most unusual places. For example, the inspiration for my novel, Tangles of the Heart, started early evening on the Fourth of July. Buzzing with excitement, my two pre-teen girls piled into the car, and my husband and I followed them.

Soon my husband was driving to scope out a good place to watch fireworks. Feeling the spirit of the holiday, he took on the role of Chevy Chase, fearlessly leading his family on an adventure, cracking jokes and telling us that this would be fun. 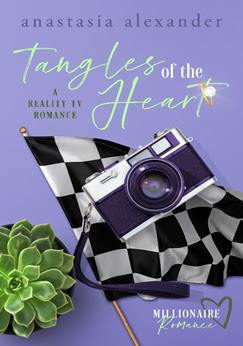 A few minutes into the trip, I mentioned to my husband I needed to come up with a title for a new novel I was going to start to write.

“We can help,” the girls yelled from the backseat. They started brainstorming possible ideas. After about an hour of playing the game of putting together a title as we traveled slowly through backed-up traffic, we had come up with, Tangles of the Heart.

Filled with excitement from coming up with a super cool title, I decided to continue the book creation work. After all, we were in traffic, my family was a captive audience, and everyone was still involved in the Creation Game.

I gave my family a quick recap of my previous story (The Superstitious Romance) that had starred Darlene as a supportive daughter as her mother Camille struggled to find love.

I have no idea how a love triangle idea came up, but it did. I’d bet money that it was my husband who offered up the concept of a sexy race car driver being one of the choices.

Okay, he didn’t say “sexy.” He’d never say “sexy,” but hey, if you’re going to write a romance, you have to make the love interest sexy. Just have to. We, the readers, want our dreams.

My husband has always been great at coming up with names, and he offered Cactus Ronnie for the race car driver. I loved how that sounded on the tongue, so Cactus Ronnie it was.

The girls became much more involved in the issues of the heart. They offered up a lot of creative suggestions and, at times, felt genuinely sorry for the main character Darlene.

By this point, we had secured a fireworks viewing spot. As we set up our chairs, the ice cream truck rang its music, making its rounds. My husband ran for the truck as my cute little girls gathered around me on their camping chairs, wanting to continue the brainstorming.

When the ice cream cones showed up, my family’s brainstorming ended as they focused on the ice cream. It was the Fourth of July, after all.

Once the fireworks gave its last boom, the girls climbed back into the car, wanting to hear more of the story.

As I talked through the possible plot points, we meandered slowly towards home. I barely noticed the long lines of traffic as an exciting story was being birthed. We were almost home when I neared figuring out how to end the tale.

I stopped brainstorming the story at the point where Darlene had to make a choice. Well, actually, lots of choices.

“What did she choose?” my girls asked.

That was when I knew that I was onto something good.

I am proud to announce that the “creative game” that I played with my family on the Fourth of July has resulted in the published novel, Tangles of the Heart. Today is release day!

Here is a little about the story:

Can love survive the quarter-mile at 200 miles per hour?

Darlene Britain lives a quiet life in Island Park, Idaho, with her mom and stepfather, until she takes one trip to Tucson, Arizona, at her boyfriend Austin’s request. On the plane, she meets sexy race car driver Cactus Ronnie. He is bold, takes risks, and is committed to following one’s passions.

This chance meeting upsets Darlene, Ronnie, and Austin’s worlds by forcing them to view their lives differently. All of them end up taking chances that none of them ever thought they would.

The risks lead them to daring escapes, adventures at the drag strip, life-threatening night drives down the race track, marriage proposals, and ultimately the heartbreaking choice of choosing a path that will change everything for all of them.